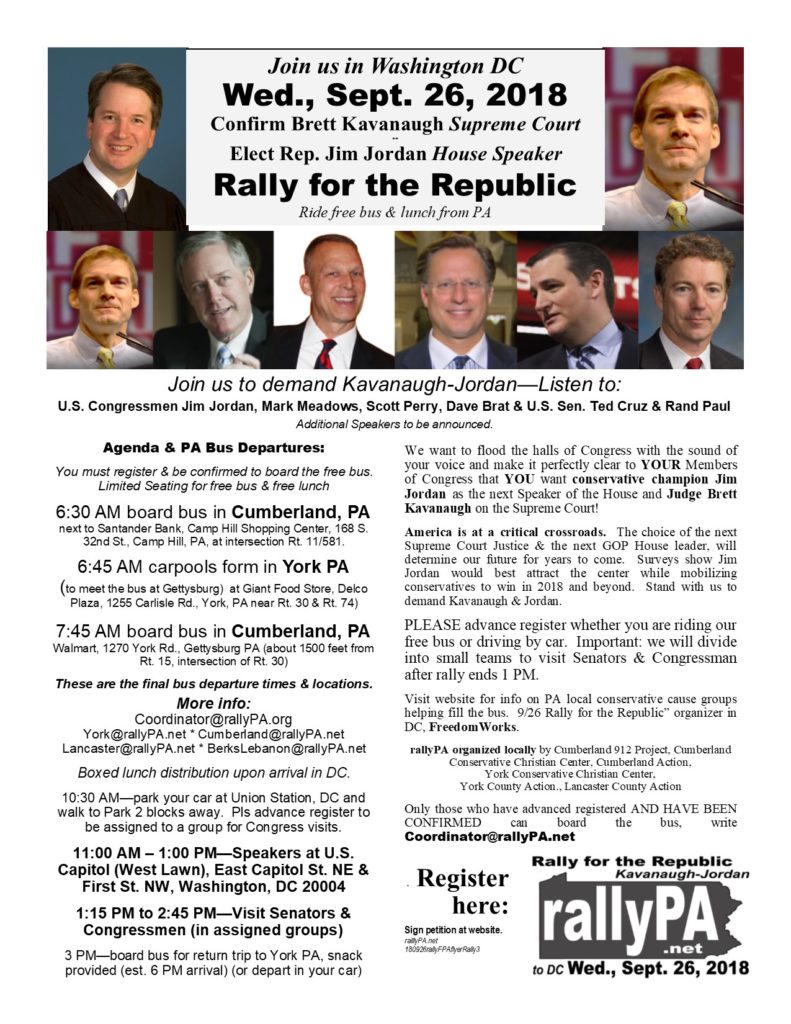 A coalition of conservative organizations in south central PA will have their members and supporters fill a bus this Wednesday Sept. 26 to “ride to the sound of the guns” in Washington DC to press Senators to confirm Judge Brett Kavanaugh for U.S. Supreme Court.  The flyer with the final departure times and locations and other info is HERE (or click on image).

The final event flyer with the latest bus departure times and locations is HERE or click on the image above.

The coalition setup a website rallyPA.net to help coordinate their activities to send members and supporters to the “Rally for the Republic” in Washington, DC organized by FreedomWorks, which paid for the bus and lunch for the south Central PA coalition.”  The rallyPA Coordinator praised FreedomWorks for their wonderful coalition building work.

This is the filthiest and most partisan campaign in history, even surpassing the dreadful spectacle we saw with the confirmation of Judge Bork and then Clarence Thomas before the Senate.  Senator Bob Casey, expected to vote with his liberal-left colleagues against Kavanaugh, is on the list to get a visit from the group, which will make a last minute appeal to the Senator as he prepares to face voters in November.

We still have at least 5 individuals who have NOT YET CONFIRMED the seat on our bus they registered for so if you want to take one or more of these seats to join us for this historic trip please write immediately to Coordinator@rallyPA.net.  We don’t want a single empty seat on this bus so if you can help us please write immediately and be sure to provide your full name, phone number and which location/time you wish to board the bus (or car-pool).

The group will also ask GOP Congressmen to choose strong conservative, Congressman Jim Jordan, as the next Speaker of the House, in order to give the best support to President Donald Trump and the conservative agenda and fight the impeachment effort to be launched by liberal-left Democrats.

Those riding this bus to DC are the most committed conservatives in south central PA, many of whom took off from work to be able to participate in this trip. If you can join them please write immediately.

The group of 50+ on the bus will split into three smaller groups each led by a spokesman and a coordinator to visit Senate and House members in their offices close to the rally point. One of our three groups will have the Vice President for Advocacy of FreedomWorks as the staff aide for the group and will also have an embed TV camera crew (we anticipate it is Fox TV News) to follow the group and report on its activities.  Watch Fox TV news on Wed. night if you aren’t there with us and see what you missed out on.

Details on the flyer.

The Oct. 6 annual Statesman of the Year and Candidate Forum is set for October 6 at the Country Club of York, 8:30 AM tickets are still available HERE.

Last year’s award winner, Congressman Scott Perry, will present the award and he will be joined in that task by another former Statesman of the Year, State Representative Seth Grove.

An 8 AM VIP Coffee will be held with Congressman Perry, State Representatives Kristin Phillips-Hill and Seth Grove and Table Sponsors and Host Committee (Bronze, Silver, Gold and Platinum.  Visit the website to register.

The breakfast this year is being co-sponsored by Americans for the Trump Agenda, Secure America Alliance, Uniformed Services League together with organizers Conservative Christian Center and York County Action (an e-newsletter for the past 2 years.

Write York@ConservativeChristianCenter.org if you have any questions or if you are on the ballot as the GOP or Democratic Party nominee and you would like speaking time at the breakfast.