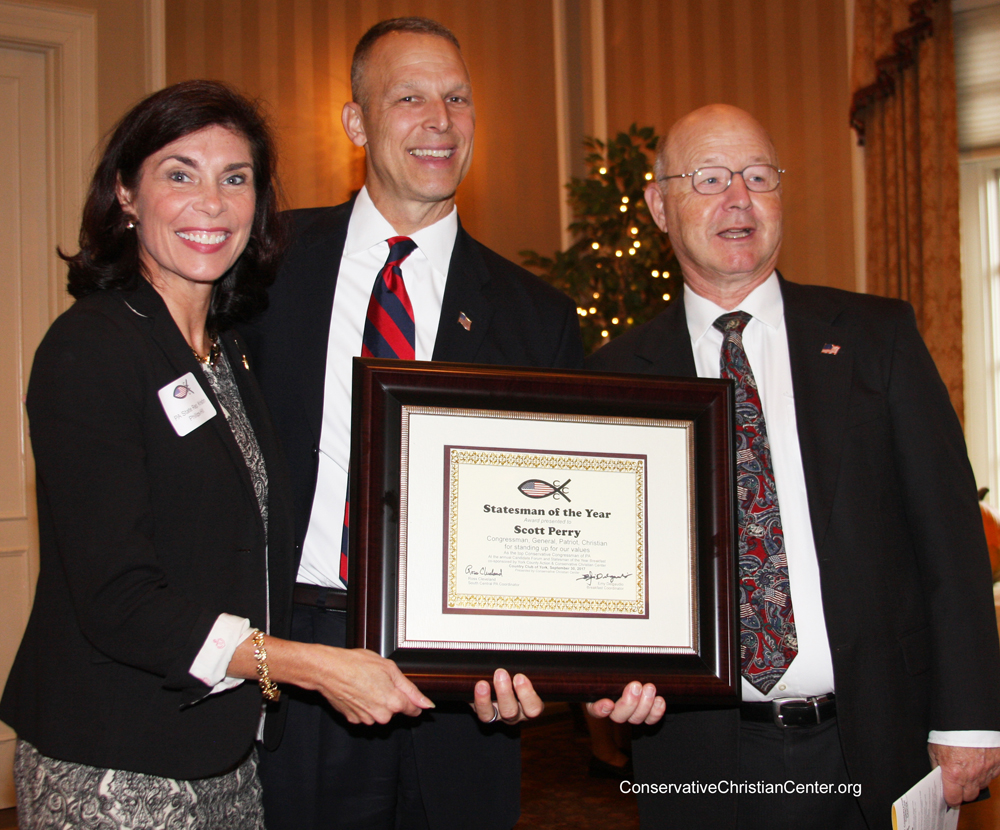 Former “Statesman of the Year” Rep. Will Tallman on Fox TV to explain his new Pennsylvania Legislation, invited to speak about it at Conservative Christian Center breakfast on October 6

Former Statesman of the Year of York County Action (now operating as Conservative Christian Center), State Rep. Will Tallman, thinks it is about time something is done about biased school teachers who unfairly inundate their students with liberal-left propagandize, including what the Supreme Court calls “express advocacy” of their favored causes and candidates, attacking those candidates they do not ant elected.  He wants it stopped.

No parents send their kids to school in order to have a leftwing teacher use the classroom in such an unfair way.  All of us think that schools are to teach facts and to teach critical reasoning for our country’s future voters, decision makers and leaders.

Sadly, there are too many teachers in America who do not agree with that and use their authority over young students to propagandize for their favorite leftwing issues and candidates.  Their idea of academic freedom simply doesn’t match up with those who are paying the bill for the education system in America.

So Rep. Tallman has announced that he will introduce legislation to curtail this unfair practice, and has already been on Fox TV for the past two days to explain it.

We hope he starts a national trend, and we hope his legislation after fine tuning, is introduced and passed in Pennsylvania to kick things off.

Let’s take a closer look at what has Rep. Tallman upset.

A recent study of political affiliations of faculty members at 51 out of 66 liberal-arts colleges with the highest ranking by U.S. News, shows what an overwhelming, one-sided edge that liberal Democrats have over conservatives in academia. (see study at National Associatioin of Scholars HERE).

Democrats dominate most fields, according to the study.  The ratio of Democrats to Republicans is 70 to 1 in religion, 33 to 1 in music, 21 to 1 in biology. The fields of philosophy, history and psychology the Democrat professors outnumber Republicans by 17 to 1.  In political science it is 8 to 1.  Only in engineering is it even close, but Democrats still dominate at 1.6 to 1.  There were no fields where Republicans outnumbered Democrats.

At 39 percent of the colleges in the study, there are actually no Republican faculty at all.  At the remaining 61 percent the Republicans are so few as to be almost zero.

The sample in the study is credible, with 8,688 tenure track, Ph.D.-holding professors beingreviewed.

There are several reasons why these numbers are disturbing.  Foremost, the students are not exposed to both sides of the many contemporary issues that our country faces.  They are not being trained as critical thinkers, to see both sides of each issue.

Second, our schools have become virtual training grounds for liberalism.

Hiding behind the idea of “free speech” for teachers, we actually are suppressing free speech for students.  What student is equipped with the experience, credibility or training, to challenge his teacher, who has the ability to punish him by reducing his grades?  It is a very unfair situation in the classroom.

The problem isn’t how incredibly “not diverse” the education system is.  What irks State Representative Will Tallman, is that teachers use their position to propagandize their students – a captive audience – for their pet liberal-left causes, with negative about President Trump and Republicans, and with favorable commentary for their favored Democrat candidates.

Tallman’s intention to limit school teachers ability to propagandize their students with legislation he will introduce, was a major topic for the past two days on Fox TV, with his making a short appearance to explain today.

We think highly enough of our former Statesman of the Year’s idea that we have invited him to come and speak to us about it at the annual “Statesman of the Year” award breakfast and Candidate Forum on Saturday morning, October 6 at the Country Club of York.  He was one of the speakers last year who helped present Congressman Scott Perry with the award.  We’d be delighted to have his help in presenting this year’s nominee, State Rep. Kristin Phillips-Hill, with the 2018 award.

Rep. Tallman’s wife by the way, will be on the free bus next Wednesday, 9/26 to Washington, DC to rally for Judge Brett Kavanaugh for Supreme Court, and for Rep. Jim Jordan for House Speaker.  The bus starts at Camp Hill, PA and will pick up York PA passengers either at Gettysburg (Rt. 15 & Rt. 30) or at York Galleria.  There are still several seats open on the bus.  We are all but certain to have to leave earlier than what is posted on our website but you can get details and register at rallyPA.net (important: the bus will leave EARLIER than listed, still to be determined).

For the October 6 breakfast, the early-bird discount tickets are still available HERE.

All Republican and Democrat candidates are invited to speak to the group during the “Candidate Forum” part of the breakfast.  Candidates should write to confirm their wish for a speaking slot at York@ConservativeChristianCenter.org.

There will be a VIP coffee and photo op with Congressman Perry and State Rep. Kristine Phillips-Hill before the breakfast, from 8 AM to 8:30 AM before the 8:30 AM breakfast starts (for speakers, and the VIP’s who purchase a table or are on the Host Committee as a breakfast supporter).

While our major focus of the breakfast is our new Statesman of the Year, Rep. Kristin Phillips-Hill and the award presentation by Congressman Scott Perry, and the Candidate Forum, we are very excited to hear more about the Will Tallman Bill to restore Academic Freedom in the Classroom and stop unfair, express advocacy of leftwing causes and candidates by leftwing school teachers.