Election Day this Tuesday, Nov. 6 as CCC “Value Voters Guide” awards One Democrat “B+” and 12 GOP candidates “A” rating with all other Democrats at “C or D” rating.

Last call for the popular brochure “Value Voters Guide” first published by the Conservative Christian Center at its annual Candidate Forum breakfast on October 6.  The guide is perfect to give out at Churches this Sunday, the last before election day, and at polling places on election day, Tuesday, Nov. 6.

The complete list of candidates with Ratings and their answer to 9 survey questions, is below from SIDE 2 of the Guide.  Below that, SIDE 1.  (click on the image for the JPG to view.  For the more print-friendly PDF here: PDF SIDE 1, and PDF SIDE 2). 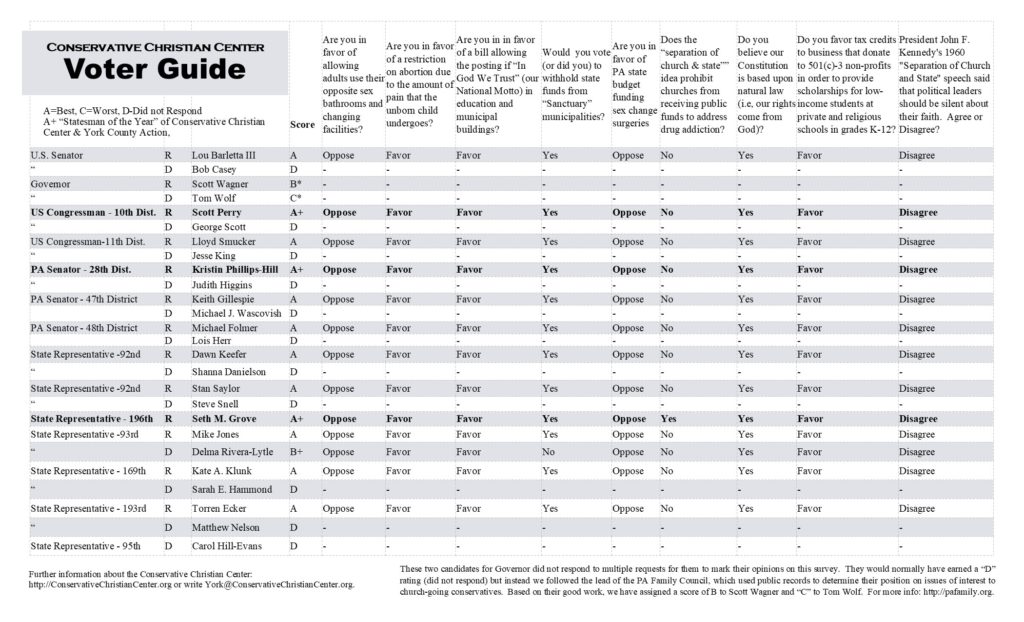 VALUE VOTERS GUIDE, side 2.  The inside 4 panels shows the candidates, how they answered our 9 questions and our rating (A for best, C for lowest and D for did not respond).

While most Democrats running for office earned the lowest rating of “D” (for “did not respond), State Representative candidate Delma Rivera-Lytle, who attended and spoke at the annual picnic of Conservative Christian Center this past summer and again at the annual Candidate Forum, earned the highest rating of any Democrat since our Survey Guide first started publishing many years ago with a “B+ rating.

Bringing up the rear of the top rated candidates was former State Senator, candidate for Governor, Republican Scott Wagner with a “B” rating, contrasted with the “C” rating of the incumbent, Democrat Tom Wolf.

The two candidates for Governor, both of whom did not respond to repeated requests to answer the survey questions, got their rating of “A” and “B” when the Conservative Christian Center followed the lead of the Pennsylvania Family Institute.  PFI’s survey was also ignored by both candidates, but they gave answers to survey questions from public records (although they did not issue a rating).  Our “B” for Wagner and “C” for Wolf was based up the information at their website, click HERE.

To obtain 100 or more copies of the new Value Voters Guide (our actual cost is $10 for this and donations are welcome) please email York@ConservativeChristianCenter.org or call the chairman at (717) 827-7330.

You can also print copies using this PDF – either on your own printer (need 8 ½ by 14 sheets, 2 sides) or at a nearby fast-printer, page 1 HERE and page 2 HERE.

To donate to help pay for this effort please mail your check to Conservative Christian Center, 2159 White St., Suite 3-149 Freedom Center, York PA 17404.  Or find the donation link at the website ConservativeChristianCenter.

For example, if you plan to vote for a candidate who favors abortion, then, you are not voting with an “informed conscience” but with a “malformed” or uninformed conscience.  If you were informed,  you would know that there are certain issues – such as the right to life – which are paramount, and others which are very important.  If you know your own position on these issues, our “Value Voters Guide” helps you pick out candidates who best match up with your views.

We like to joke that our Value Voters Guide is also a great help for atheists who can use it to pick the candidates NOT to vote for.

You also have a duty to evangelize for your faith, to not hide your light under a bushel basket.  The example of “light’ is used many dozens of times in the Bible.  In the context of the election this Tuesday, evangelizing means you need to do your best to help boost the vote turnout of like-minded, conservative Christians.  Again, the Value Voters Guide is a terrific help for those who understand this duty to evangelize.

We are grateful to the candidates who took the time out of their busy schedule to mark their survey and return it to us for this 4th edition in 2 years of the VALUE VOTERS GUIDE.  Although we do not endorse candidates for office (as a non-partisan, non—profit organization) we certainly do wish to help boost voter turnout by conservative, Church-going Christians and thereby to increase their influence on the public policy process.

You can help by circulating the link to this article at our website, by using the Facebook group page to help us circulate this news and by urging your like-minded friends, neighbors, church-goings and relatives to vote on Tuesday.

Vote turnout, not the standing in the public opinion polls, is going to determine whether those most friendly to the philosophy of President Donald Trump, or those who hate him and his followers, will win on Tuesday.  Don’t be a no-show in this election.  Stand up, speak out, be counted.

P.S.  You’ve heard the saying before so here it is again: “The only thing necessary for the triumph of evil is that good men do nothing.”  Sir Edmund Burke courageously said that in defiance of his own King, in the British House of Lords, speaking in defense of the American revolution and criticizing his own government.  If you do not speak out because you are afraid, then you will be part of the problem America will have in the next two years after November 6.  We pray that those friendly to the philosophy of conservative Christians, do well on November 6, in York, in Pennsylvania and across America.  We pray in Jesus name, and ask you to do the same.  Amen.