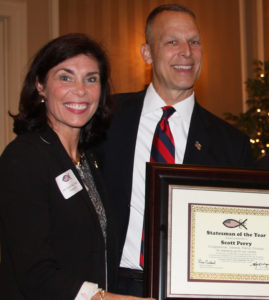 Rep. Kristin Phillips-Hill and Congressman Scott Perry Confirm to speak at annual “Candidate Forum” of York County Action and Conservative Christian Center at the Country Club of York on October 6 where award will be presented

(York, PA) State Representative Kristin Phillips-Hill has been nominated as the 2018 “Statesman of the Year” by York County Action and the Conservative Christian Center, and has confirmed that she will attend the annual awards breakfast and “candidate forum” at the York County Country Club on Saturday morning, October 6.  United States Congressman Scott Perry, the 2017 award winner, has also confirmed to attend.  Public comment is being sought about this year’s nominee before the final vote of the Conservative Christian Center to choose its “Statesman of the Year” (comment to: StatesmanOfTheYear@conservativeChristianCenter.org).  Any comments received may be published in this space or in the CCC e-newsletter unless the sender indicates their wish to keep their comment on this nomination private.  If you have an opinion, in favor or in opposition, please let the CCC board know your views.  Thank you.

Early Bird Discount for October 6 Breakfast
Save $5 off, only $30
or save $15 for a couple only $55
Limited time, purchase right now HERE
(we must pay the Country Club of York a large deposit.  Once paid, the early bird discount will be withdrawn & breakfast tickets will be available at the regular price until room capacity is reached)

Large early bird discount for table of 8
We seek Platinum, Gold, Silver and Bronze Host Committee
and advertisers in our Program Journal

Representative Phillips-Hill, the GOP nominee for the State Senate seat vacated by Scott Wagner as he campaigns for Governor, introduced Congressman Perry and presented him the “Statesman of the Year” award at the September 30, 2017 annual candidate forum in behalf of York County Action and Conservative Christian Center (photo above) at a sold-out breakfast meeting at the Country Club of York.  She also spoke at the Conservative Christian Center’s annual Heritage Fiesta last month, which despite a heavy rainstorm set a record for attendance.

Organizers of the October 6 breakfast anticipate a sold out, full subscribed breakfast on October 6 and urge supporters and friends to reserve their tickets promptly.

Dr. Ken Gibson, York County Action Chairman Emeritus and Advisor to Conservative Christian Center, said of Rep. Kristin Phillips-Hill, “my advice to our board is to choose Rep. Kristin Phillips-Hill as Statesman of the Year, not just because of her perfect voting record in the legislature but also because she is a wonderful example of a good public statesman whose values match those of conservative, church-going Christians.”

The faith statesmen submitted by Rep. Phillips-Hill to CCC was chosen as one of the top three and printed in its May 2018 Primary Election Value Voters Guide showing how candidates answered 12 questions.  She said, “It is through faith in Jesus Christ, the power of prayer and the foundation of biblical scripture that the strength to rise above the morass of Harrisburg and public life is found.”

Examples of Rep. Hill’s perfect 100% score include her answers to these questions: (1) Are you in favor of a bill allowing schools to post the National Motto of the United States (In God We Trust) in education and municipal buildings? (2) How would you vote on withholding state funds from Sanctuary cities? (3) Are you in favor of restrictions on abortion.”  Representative Phillips-Hill’s strong stance against raising taxes and balancing the state budget also make her very popular with the conservative-church going crowd.

The Conservative Christian Center and York County Action are projects of a non-profit organization recognized by the IRS and do not endorse candidates for office.  Breakfast tickets can be purchased online at https://statesman2018.eventbrite.com.  Further info York@ConservativeChristianCenter.org

The CCC board will review public comment, counsel from its advisors and make a decision on the 2018 Statesman of the Year by the end of August, for its October 6 annual breakfast and candidate forum.  Candidates who wish to confirm their slot to speak may write York@ConservativeChristianCenter.org.  Candidate literature may be placed on tables, and literature booths for candidates are available at the breakfast.

Past Statesmen of the Year include State Rep. Will Tallman and Seth Grove, York County Commissioner Chris Reilly, and Congressman Scott Perry.