CCC Invites you to join us for 6 PM dinner-work meeting to confirm Judge Gorsuch and “The Case for Christ” movie at 8 PM in Lititz, PA

Conservative Christian Center (CCC) in South Central Pennsylvania asks church-going Christian conservatives to take immediate action to help confirm President Donald Trump’s nomination of a highly qualified nominee for the Supreme Court, Justice Neil Gorsuch.  Senator Toomey should be thanked for his statement of support (click above or HERE) and asked to vote to kill the filibuster rule so that a majority of Senators can confirm Neil Gorsuch.  Democrat Senator Bob Casey should be asked to vote to stop the filibuster, but failing that to vote to kill the filibuster and to confirm Judge Gorsuch.

With subscribers and members in Cumberland County and York County, Conservative Christian Center asked supporters to take time in the next 48 hours to help confirm Gorsuch for the Supreme Court.  That means you, Dear Rader.  But there’s more:

Following that dinner (pizza, salad, sandwiches and Italian dishes available for purchase) work meeting – you can arrive anytime to help but we will have specific steps you can take at the meeting, to help confirm Judge Gorsuch and we hope you can arrive at or just after 6 PM.

The CCC group will depart the restaurant to go as a group to see the one-night movie showing at a nearby movie theater, “The Case for Christ” as recommended by newly appointed CCC “Movie Night Coordinator” Monica Seitz.

The Case for Christ movie begins at 8 PM for this one-night showing at nearby Penn Cinema 14 at 541 Airport Road, Lititz, PA 17543.  Tickets are pricey but worthwhile at $15 each.  Monica’s recommendation of this movie is for good reason.  For example, best-selling conservative author (Jesus on Trial and The True Jesus) David Limbaugh said of the movie, “It was so good that I was sorry when it was over. Just awesome, from beginning to end.”

Showing support from noted Protestant as well as Catholic leaders, the Catholic Archbishop of Philadelphia, Charles J. Caput (O.F.M., Cap.) said “The Case for Christ is an engaging, beautiful story of a family coming to faith in Jesus Christ, made more compelling by its basis in real events. I warmly recommend it.”

We strongly urge readers and conservative church-going Christians in south Central Pennsylvania to join us in this “double play for faith” this Thursday night, April 6 in the Lancaster-Letitz area of PA – at 6 PM or 6:30 PM for a dinner-work meeting to confirm Neil Gorsuch for Supreme Court, followed by a 10 minute drive to the nearby movie to watch “The Case for Christ” movie.

A laptop PC will be available to help people send a message to both of our U.S. Senators, among other actions we can take to confirm Neil Gorsuch for the Supreme Court by the hoped for vote on the Senate floor this Friday.

If you want to help make a difference you cannot put this off – either take the actions outlined below BEFORE our Thursday night meeting, or join us on Thursday nite, the last chance to influence the U.S. Senate vote, for this “dinner-work meeting” and movie night.

“This is the reason that a record breaking 82% of church going Christians voted for Donald Trump for President – so that he and not Hillary Clinton could nominate the next Supreme Court Justice.  If our Pennsylvania U.S. Senator Bob Casey (D) votes to filibuster to kill this nomination he is voting to kill self government in America,” says Conservative Christian Center.

“We strongly urge Senator Casey to switch his vote to reflect the wishes of the majority in Pennsylvania who chose Donald Trump to make this Supreme Court appointment, not Hillary Clinton and certainly not Senator Chuck Schumer of New York, who wants to veto and obstruct anything that President Trump does as President and literally stop him from governing and doing his job” said Conservative Christian Center.

To support President Trump’s nomination of Judge Neil Gorsuch we urge the following steps should be done within the next 2 days.

Here are the details for the action steps suggested by Tea Party Patriots.

For action item #4 and #5, join us at Caruso’s Italian Restaurant in Lancaster (close to the movie theater in Lititz) at 6 PM on Friday.

For action item #6, Call and tweet the 9 Senators in states which went for Donald Trump in 2016 and who are up for reelection (thanks to Tea Party Patriots) 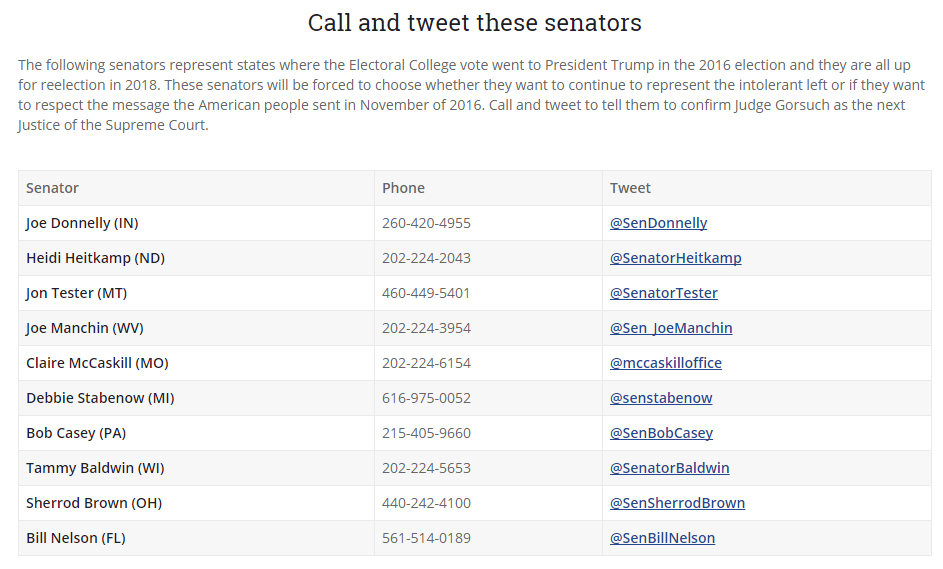 Save the Date: May 5

Friday nite, May 5, Candidate Forum for Judges of the Court of Common Pleas for York County, York County District Attorney and other local offices.  First event of the south central PA area Conservative Christian Center with Candidate Survey questions to be provided to attendees, all candidates invited to speak followed by secret ballot straw poll vote.  Stay tuned for more details to be announced shortly including venue location.

If you are not on the e-newsletter list please write and ask (no cost).  And if you would like to be notified of meetings of the new “working group” of conservative Christians please let us know.  Our CCC South Central PA Coordinator is Ross Cleveland and he is on the lookout for those willing to pitch in and help us increase the influence of conservative Christians in south central PA including York County and Cumberland County.  Write: RSVP@ConservativeChristianCenter.org.

Just to be sure there is no confusion, York County Action is an e-newsletter for conservative Christians in the York County area.  It has no association or affiliation with the old Action of PA, which has had no activity in York County for about one year, so far as we are aware from having stayed in regular contact with the last members of their local board in York County.  York County Action – because faith without action is dead – maintains a website (http://YorkCountyAction.com), a Facebook page (   ) and this e-newsletter.  Write RSVP@ActionofPA.com for further info or questions.