Statesman of the Year Scott Perry to deliver keynote remarks at breakfast this Saturday; 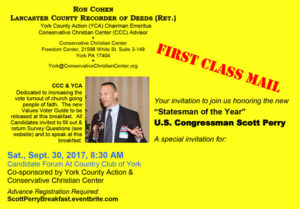 (click on the image to read it full size; side 1 of the postcard at left, and side 2 with a message from Ron Cohen, Chairman Emeritus of York County Action, below). 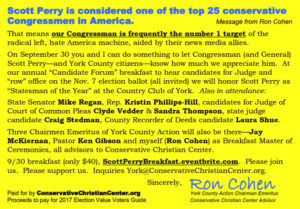 Candidates who are on the ballot but who have not confirmed their speaking at this event – a CANDIDATE FORUM – should write York@ConservativeChristianCenter.org.

The last time we had a Candidate Forum for the May primary we had an avalanche of last minute requests.  This time we have a far tighter schedule and limited number of minutes for candidates so please, write to us immediately if you are a candidate and want a speaking slot.

The postcard sent to 850 conservative Christians in the York County and nearby area is a followup to the 4 page letter sent out several days earlier signed by Former York County Action Chairman and CCC Advisor, Jay McKiernan.

The postcard, with a message from Ron Cohen, says “Scott Perry is one of the top 25 Conservative Congressmen in America.  That means our Congressmanis frequently the number 1 target of the radical left, hate-America machine, aided by their liberal news  media allies.”

Honoring our favorite Congressman is one part of this Saturday’s breakfast, and hearing from AND ABOUT the candidates on the 2017 general election ballot, is the other part.

We have also just sent a followup email for the candidates including the link to the CANDIDATE SURVEY we sent to them by mail two weeks ago.  We used the addresses that they filed as a candidate with.  We had complaints last time that that some candidates did not see the survey until the last minute.  Then as now, they were sent out two weeks before the deadline.  And sent out by email today.  Here’s the link:

The Survey answers will be provided to attendees at the breakfast this Saturday along with the “score” – with the best rating an “A”.

Candidates earn a “D” rating if they completely ignore our survey, and a “C” rating (at worst) if they respond but don’t answer some or all of our survey questions.

Some candidates who do not respond to our simplified survey questions, or who did not answer most of our questions and who earned a “C” rating last time were pretty upset with us.  But we aren’t “giving” you the grade – just as all of us were told in grammar school.  You “earned” your grade by the answers you gave.

And, we also heard the criticism during the primary, that just because people go to Church they are not right on the issues.  True.  Very true.  But 82% of the ones who go to Church voted for Donald Trump for President and made the difference for him to carry Pennsylvania and several other battleground states.  Our goal is to increase the number of church going, people of faith, who show up at the polling places on election day and to help them vote “with an informed conscience.”

We know some of the candidates who have not answered our survey, do receive this e-newsletter.  We hope you will take the time to do the survey rather than complain when you earn a “D” rating by putting it off or ignoring the survey.  For those who DID reply we thank you.

One last item – some of the folks who have been criticizing Conservative Christian Center go beyond the normal political give and take.  While we do not endorse candidates, some are very upset with us because they earned a “C” or a “D” rating from us, and had a very close primary race.  We wish them well in the general election but we think they go over the line with some of the smears we have heard them or their supporters circulating about the Conservative Christian Center.  If you hear one of those and wish to either report it (for possible future legal action), register a complaint about it, or simply make an inquiry (or perhaps you agree with the criticism), you can write to our south Central PA Coordinator, Ross Cleveland, at RossCleveland@ConservativeChristianCenter.org.

God bless all the candidates who put themselves into the public policy arena to improve our country but may God especially bless the ones who fill out our survey questions (12 issue and 13 background questions) and send them to us by fax or email before this Thursday at 12 noon.