The new “Value Voters Guide” of the Conservative Christian Center gives a perfect score of “A” to eight candidates for office on the election ballot this Tuesday, with an “A+” going to former CCC “Statesmen of the Year” Congressman Scott Perry and State Representative Seth Grove. 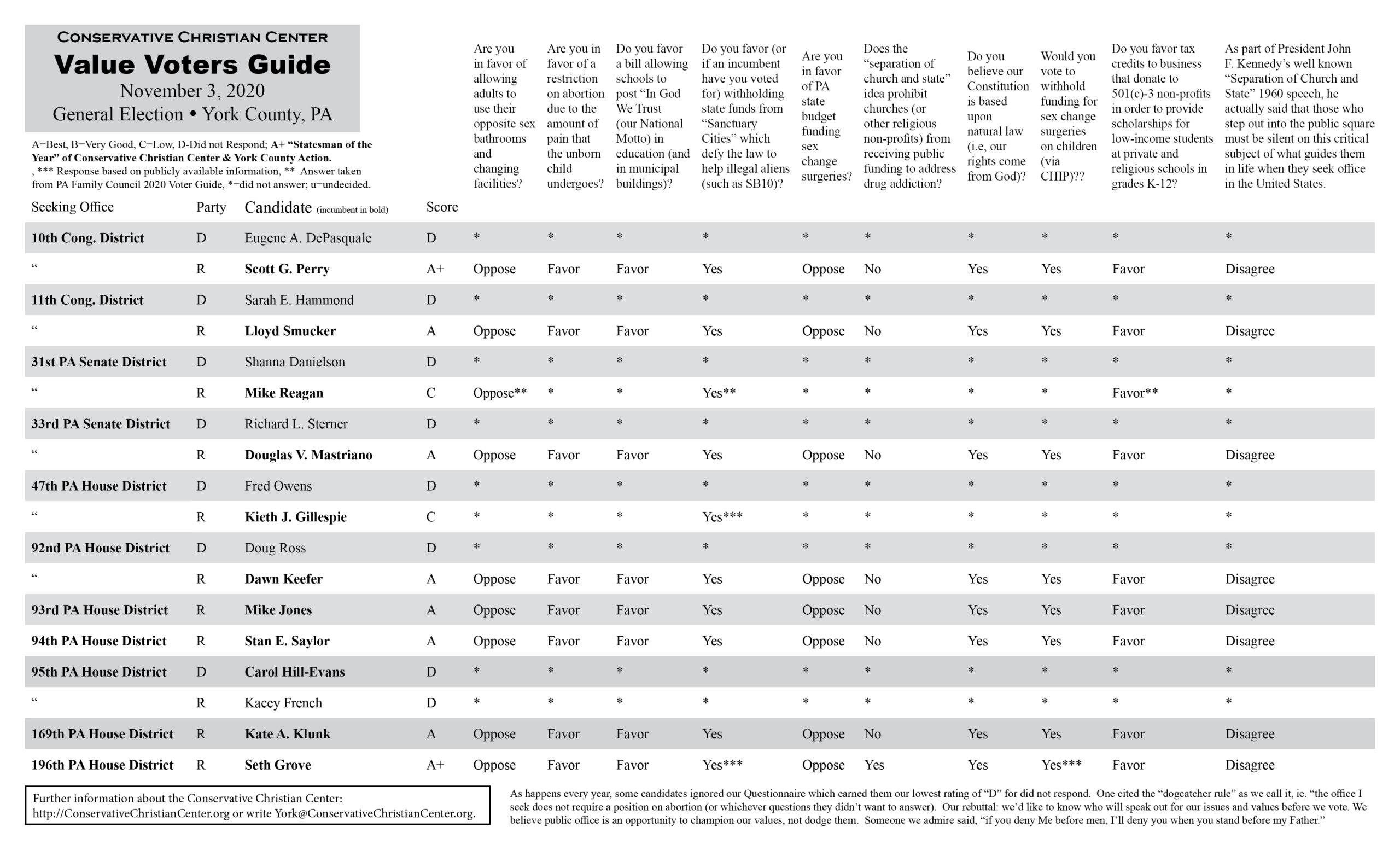 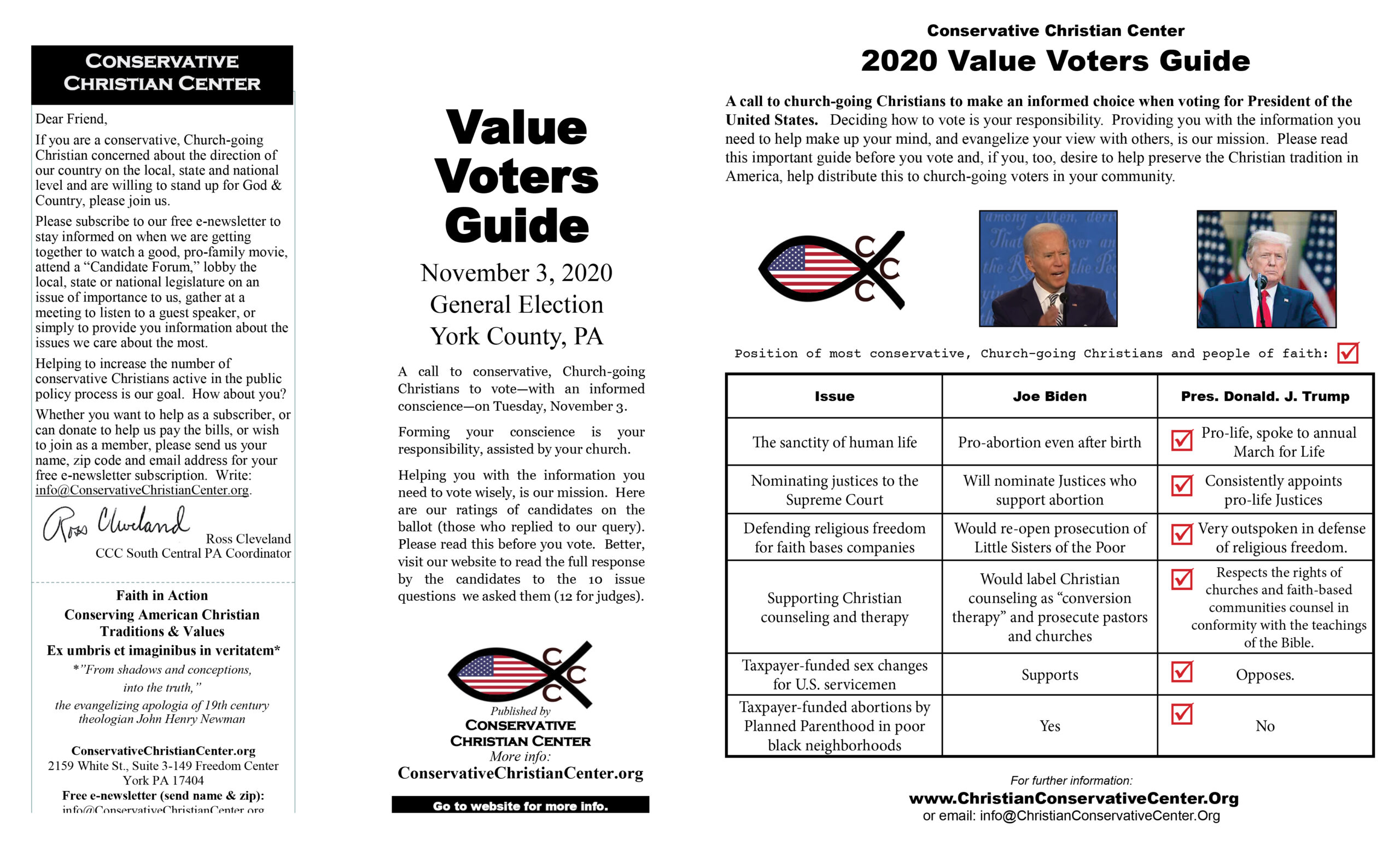 The Value Voters Guide, is in its fourth year of distribution.  This is the ninth edition.  It is distributed as a brochure at Churches and in front of polling places.  To request a stack of these brochures for you to give out please write York@ConservativeChristianCenter.org.

For the second year, the brochure was also sent to 1,000 conservative supporters in York County and GOP super-voters by first class mail (which arrived this past week) and by an ad in the York Daily Record.  This year’s ad is a full page and appears on Monday, November 2.  Watch for it.

Finishing at the bottom with a “D” rating (for “did not respond) were all of the Democrat candidates, a first in the history of the Value Voters Guide since a score system was implemented four years ago.

There have been ratings of “C” and a rating of a “B” in the past by Democrats.  This caused some upset among local GOP leadership, which cautioned, on those occasions where Democrat scores were competitive to those of a Republican candidate, that the Conservative Christian Center is not sufficiently supportive of their party.

Conservative Christian Center is in fact, an independent, non-partisan organization not affiliated with or supportive of any political party.  For any GOP leader to criticize CCC for being what it is – a truly independent organization – is actually an effort to suppress the vote of faith based voters who usually give them a very large 70% majority of better.

The CCC mission is to boost the turnout of conservative-minded, faith based, church-going people of faith.

While some Democrats have been hostile to CCC because this faith-based “value voter” usually votes for GOP candidates, others have been smart enough to realize that they are welcome at CCC events and are free to engage with this important voter demographic.  Several Democrat candidates have availed themselves of the friendly, hospitable and open atmosphere of annual CCC “candidate forums” and the annual summer picnic (next year will be the 10th) to engage with our voters.

For the first time in 2020, a “Value Voter” survey was created for the candidates for President, showing six (6) questions of interest to the Value Voter, compiled from public information sources.

Regarding the bias of our survey questions we do not evade or avoid this: Conservative Christian Center’s name proudly proclaims our bias. For example, on the “issue” of “The Sanctity of Life,” the survey indicates Joe Biden is pro-abortion even after birth.”  It states, President Trump is “pro-life, spoke to annual March for Life.”

For those Democrats who participated in our survey (which means you received a minimum score of “C”) we thank you, wish some of you were here this year, and hope to see you in the future.  Answering questions posed by voters and voluntary associations like Conservative Christian Center, is part of running for office.

To those candidates – all Republicans this year – who earned an excellent rating – we thank you.

And we thank all candidates for office who helped our voters choose a candidate to vote for on election day, this coming Tuesday.

P.S. You can share the electronic version of this “brochure” by visiting the website of Conservative Christian Center and sharing the brochure link.  Watch for the full page ad with this Value Voters Guide on Monday, 11/2/20.  Call on us if you’d like some of the brochure for your church or to hand out in front of your polling place.  Write York@ConservativeChristianCenter.org.